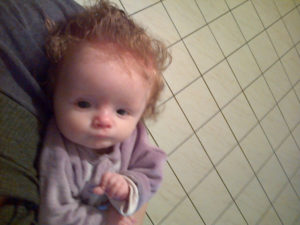 March 2012….an island in Philippine…a honeymoon…a doctor telling me “you are pregnant”

I had to undergo a C section as that young lady was stuck the wrong way around in my belly.

Straight after birth she was taken by the doctors, I can still hear my husband saying “ omg her hand and feet are so tiny”.

2hours later I was about to meet my child for the first time when the not so clever nurse looked at me and said “sorry Mme laureys, your child is a midget and  she is taken care of by the doctors.

This was the first of a long series…

The first night was full of tears and questions, Emma didn’t ask for any food and once again the not so clever nurse had a go at me saying I was a terrible mum, not feeding my child as I was supposed to do.

I remain in hospital for 7 days, emma was unable to eat more than 20mml every 6hours.

Our paediatrician sent us to the main hospital in Lyon in order to see a geneticist.

At first sight she couldn’t see anything wrong with Emma except for a small size but she straight away excluded dwarfism due to her bones structures.

We spent the next 3 month going back and forth to the hospital till the day we ended up in the gastroenterology service. We were supposed to stay there for 3 days…it lasted a month.

The geneticist came back and this time she diagnosed straight away the SRS, as emma couldn’t eat, her body was asymmetric and she had a major gastric reflux.

It was really hard for us to agree on a feeding tube for our daughter as like every parent we always think “it’s going to be ok”.

From the moment they inserted the feeding tube on her noose she started putting on weight and that was a major relief for all of us.

That time period from February till July was long and complicated as none of us had any medical references and feeding your child this way is just abnormal.

In July she had a Gtube inserted in her stomach and also an operation to stop the food going up and down.

In emma’ side we could see all the benefits of the gtube, in our side I started a major depression has it was all too much for me to cope with. We removed the G tube two years later.

However my husband and the AFFIF association were here for me to help on a daily basis.

Emma’father and I had an everyday fight for her to try normal food. I’ve been trying to feed her with any kind of food she would like.

She is now nearly 4 years old and eats absolutely everything.

Those past 3 years we spent more time at the hospital than at home. We meet Pr Netchine in Paris at the early stage and despite the fact that emma is not a proper RSS ( none of the numerous test came back positives such as biopsy, blood test MRI) but she definitely has  RSS.

Emma was sweating a lot and Pr Netchine suggested she might have sleep apnea….and she had a lot of it… She now has a machine at home at night. It helps her breathing properly but not only. She is not tired non-stop anymore, good bye black bags under her eyes and she is now sleeping 12 hours straight without moving a finger.

In our medical marathon we had the chance to find a whole lot of doctor nurses ready to help and really child focused. 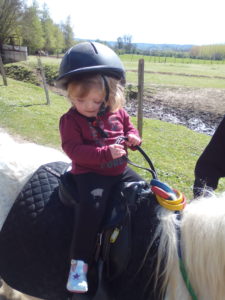 I could go on and on about our medical fight however I believe there is more to say here about the child and his/her parents.

When you get told your child is will or won’t be like the other child, your world is falling into pieces.

However what we noticed through the years is that our emma didn’t see the difference between herself and other child and did we at the end.

They need to live a life as normal as possible and once mum and dad are able to understand and fell that way…the child is going up the hill straight away.

I will still remember the day my brain just stopped working and I was crying and screaming for help from both my husband and child. I couldn’t stand being my child nurse and spending my day at the hospital. That day my husband told me to go to bed and “don’t come back until you are feeling better).

Well you know what Emma started to talk fluently a week later and became a nice young lady,. 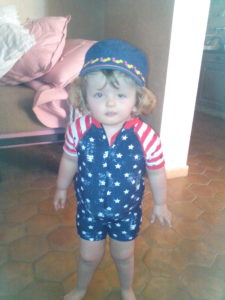 She is now nearly  4 and she walks (she only start walking at 3 and so what?) she talks (a first sentence was for Christmas and so what?) and she is starting school in September. Ho and she loves cats…she is obsess with cats…

At the end of the day life is hard as you have to fight twice, you are sick of people telling you “ho my child is so sick I can’t cope with it…well mate he is sick for about 3 days and it will stop in 3 days max…) but you know what your child will end up having a normal life, with a smaller size than the other but no matter how he will be alive anyway.

We started growth hormones beginning of 2016 and we can see so much difference , not only size wise but her muscle are getting stronger, she can run (kind of), goes up and down the stairs and well have a normal life. She is also running horses once a week.

She is going to kindergarten 4 days a week at the moment and she will start school in September. That treatment is compelling as we have to do an injection every day at the same time, but at the end of the day it’s so worth it that it makes us forget all the inconvenient.

I hope this testimony will help parents in need of answers, I couldn’t cover every single event we had to go through those past 4 years however the main idea of this is to let you know that your child was born special in every kind of way but it doesn’t matter as it’s your child and you will love him/her no matter her size, weight ecttt and none of what’s happening is your fault…